The Clean Communities of Central New York (Syracuse) works with vehicle fleets, fuel providers, community leaders, and other stakeholders to save energy and promote the use of domestic fuels and advanced vehicle technologies in transportation. 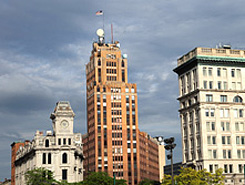 Barry Carr assumed the leadership of Clean Communities of Central New York (CC/CNY) in 2008. CC/CNY was formed in 1995 and was operated for many years by Joe Barry, who currently continues with the coalition as Director Emeritus. CC/CNY, in partnership with the other upstate New York coalitions, was recently successful in obtaining over $5 million in Recovery Act support.

Carr currently is the Manager of Business Development for Landi Renzo USA; the world's leading supplier of alternative fuel systems for OEM partners. He has been providing support to the alternative fuels/alt fuel vehicle markets since 1988. In 2017, Carr was inducted into the Clean Cities Hall of Fame.