The Triangle Clean Cities (Raleigh, Durham, Chapel Hill) works with vehicle fleets, fuel providers, community leaders, and other stakeholders to save energy and promote the use of domestic fuels and advanced vehicle technologies in transportation. 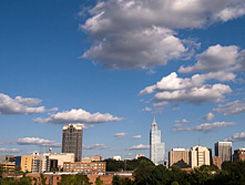 Sean Flaherty serves as Co-Director for the Triangle Clean Cities Coalition through his role as Principal Planner at the Triangle J Council of Governments. He has coordinated the Triangle Clean Cities Coalition previously, between 2008 and 2012, and has also served as Co-Director for the Centralina Clean Fuels Coalition based in Charlotte between 2012 and 2014. During his tenure with Clean Cities, Flaherty has managed multiple efforts including the American Recovery and Reinvestment Act (ARRA) funded Carolina Blue Skies & Green Jobs Initiative and the North Carolina Plug-In Electric Vehicle Readiness Initiative: Plugging-In from Mountains to Sea.

Flaherty has a Master of Environmental Management from Duke University's Nicholas School of the Environment. His work has been recognized by the American Planning Association, National Association of Development Organizations, U.S. Council on Competitiveness, and White House Office of Science and Technology Policy.

Annie Lee joined Triangle J Council of Governments as an Energy and Transportation Planner and Triangle Clean Cities co-director. She previously worked with the N.C. Department of Environmental Quality in air quality where she worked in point source emissions, energy education, the North Carolina Clean Energy Plan and managed the N.C. Climate Education Network. Annie holds a master’s degree in science literacy and has completed two fellowships at the University of North Carolina’s Institute for the Environment in climate change and energy technologies.