The Pittsburgh Region Clean Cities works with vehicle fleets, fuel providers, community leaders, and other stakeholders to save energy and promote the use of domestic fuels and advanced vehicle technologies in transportation. 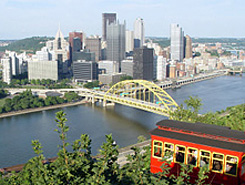 Rick Price is the Executive Director of the Pittsburgh Region Clean Cities and has been involved with the Pittsburgh Region Clean Cities for almost 15 years. He has served as coalition director, president, and has been a member of the Board of Directors for 5 years. He is recently retired from the U.S. Department of Energy after 37 years of service. Rick was the Organizational Property Management Officer for the National Energy Technology Laboratory for 20 years, during which his duties included serving as the Motor Vehicle Manager of a fleet of 82 vehicles. He was instrumental in bringing alternative fueled vehicles and infrastructure to the lab and won an award for small fleets from DOE in 2005. In 2016, Price was inducted into the Clean Cities Hall of Fame.