The Land of Enchantment Clean Cities (New Mexico) works with vehicle fleets, fuel providers, community leaders, and other stakeholders to save energy and promote the use of domestic fuels and advanced vehicle technologies in transportation. 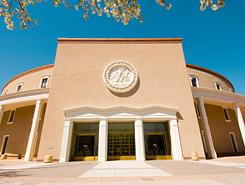 Colin Messer has been involved with the Land of Enchantment Clean Cities Coalition since 1997 as a board member and consultant and is the current Coalition Director. In 2015, Messer retired as Program Manager for the State of New Mexico Energy Office where he oversaw statewide alternative transportation fuels and fleets as well as biomass to energy projects.

In a 43-year career, Messer has operated auto repair facilities, farmed, taught, and published. He directed community college programs and administered statewide initiatives specific to gaseous fuels and advanced powertrain technologies in New Mexico and California. He has trained internationally for Cummins, John Deere, and U.S. AID. In 1992, he launched the first 100 present CNG transit fleet in the U.S. in Santa Fe, NM and continues that fleet affiliation.