The Greater Rochester Clean Cities works with vehicle fleets, fuel providers, community leaders, and other stakeholders to save energy and promote the use of domestic fuels and advanced vehicle technologies in transportation. 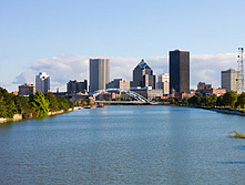 David Keefe has served as the director for the Greater Rochester Clean Cities (GRCC) coalition since July 2007. GRCC is dedicated to promoting alternative fuels and vehicles in the Rochester, New York metro region. He has served on the GRCC board of directors since 1996 and has served as the board's president.

Keefe has worked as a consultant in preparing alternative fuel vehicle studies for fleets. He previously served as the director of fleet services for the city of Rochester. While in that position, he introduced several types of alternative fuel vehicles into the fleet and facilitated the construction of a compressed natural gas fueling station. In addition, he served as the municipal parking administrator for the city of Rochester and has also held other positions in local government in budget, public works, and employment and training.

Keefe has a Master of Public Administration from the College at Brockport, State University of New York.

In 2020, Keefe was inducted into the Clean Cities Hall of Fame.