The Dallas-Fort Worth Clean Cities works with vehicle fleets, fuel providers, community leaders, and other stakeholders to save energy and promote the use of domestic fuels and advanced vehicle technologies in transportation. 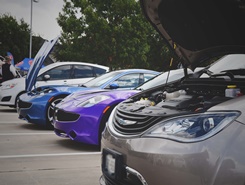 Lori Pampell Clark joined the Transportation Department staff of the North Central Texas Council of Governments (NCTCOG) in July 2005. She currently serves as a Program Manager, overseeing various programs and policies to improve air quality with a focus on clean vehicles and alternative fuels, as well as energy efficiency and renewable energy. She has worked alongside the Dallas-Fort Worth Clean Cities Coalition since 2007 and took on the Director role in November 2017.

Clark received a Bachelor’s Degree in Environmental Studies and Political Science from Baylor University. She also serves on the Board of Keep Grapevine Beautiful.