The Central Oklahoma Clean Cities (Oklahoma City) works with vehicle fleets, fuel providers, community leaders, and other stakeholders to save energy and promote the use of domestic fuels and advanced vehicle technologies in transportation. 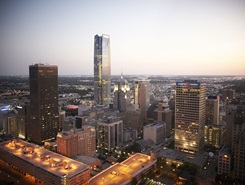 Eric Pollard has served as the Air Quality and Clean Cities Coalition Coordinator at the Association of Central Oklahoma Governments (ACOG) since December 2014.

Since 2014, COKCC has celebrated milestones and successes including: #1 for public CNG stations (per capita), #3 for public EV fast charging stations (per capita), one of the largest regions in the country remaining in-attainment of ozone standards, extension of state alternative fuel tax credits through 2028, and recognition from DOE as ‘Most Improved’ coalition for propane and E85.

Prior to joining ACOG, Pollard was Co-Coordinator of the Tulsa Clean Cities Coalition. He previously held positions with the Tulsa Regional Chamber of Commerce and the City of Oklahoma City's Planning Department.

Pollard has a Master of Public Administration in Sustainable Management from Presidio Graduate School and a Bachelor of Political Science from the University of Oklahoma.

David is an urban planner with a focus on transportation. He obtained a supply chain management undergrad degree from TCU and worked in various supply chain management roles for 5 years.
He transitioned his career to urban planning and earned his master’s from NYU. He worked with the Metropolitan Transportation Authority on a capstone project team creating a plan to convert a bus depot to support electric buses.

He worked at NYC Department of Transportation in the Freight Mobility Unit focusing on Vision Zero safety initiatives for vulnerable road users and their interactions with trucks. David’s most recent experience comes from a road safety nonprofit, Together for Safer Roads (TSR). At TSR he managed the FOCUS on Fleet Safety Program which provided truck safety training, workforce development, and vehicle safety technology to eligible fleets in NYC, Houston, and Fort Collins.