The Alabama Clean Fuels Coalition works with vehicle fleets, fuel providers, community leaders, and other stakeholders to save energy and promote the use of domestic fuels and advanced vehicle technologies in transportation. 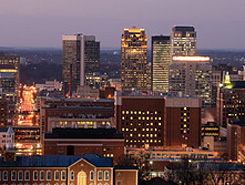 Mark Bentley has been the executive director of the Alabama Clean Fuels Coalition (ACFC) since August 2006. ACFC is a nonprofit, membership-based, organization that participates in the U. S. Department of Energy's Clean Cities program, which promotes the use of alternative fuels and alternative fuel vehicles throughout the United States. Bentley actively strives to lead efforts to build an alternative fuel industry in Alabama and leverages public-private partnerships to accomplish this goal. Through the efforts of ACFC, ethanol, biodiesel, propane, electric transportation and natural gas infrastructure projects have been implemented in Alabama.

Prior to joining ACFC, Bentley was head of business development for a major engineering firm in Birmingham, Ala. He has more than 50 years of experience in all aspects of business management including marketing, sales, operations, consulting, and entrepreneurial initiatives with both domestic and international companies.

In 2014, Bentley was inducted into the Clean Cities Hall of Fame.

Michael Staley joined the Alabama Clean Fuels Coalition in July 2019 as the organization's President. Staley brings over seventeen years of experience working alongside leaders in Alabama and Washington, D.C., political, business, and government circles. Staley previously served as Field Representative, District Director, Legislative Director, and Chief of Staff in the congressional office of retired U.S. Representative Spencer Bachus, including as D.C.-based chief of staff from 2007–2014. He also worked as Special Assistant to President Judy Bonner at the University of Alabama and as Senior Policy Adviser at Birmingham law firm Waller Landsen Dortch & Davis. Staley also provides consulting and lobbying services to clients served through Chain Link Solutions, an Alabama-based company he started in 2016. He is a graduate of the University of Alabama at Birmingham School of Business.